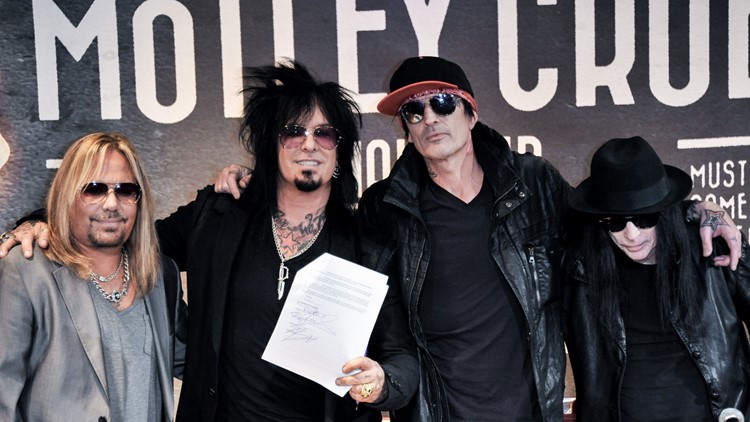 Mötley Crüe will return to Denver in 2022, 8 years after signing a cessation of touring agreement.

DENVER — Mötley Crüe, Def Leppard, Poison and Joan Jett and the Blackhearts have postponed their massive U.S. stadium tour that was originally planned for 2020 and later moved to 2021.

The four legendary rock acts will now perform at Coors Field in Denver on Thursday, July 21, 2022.

All tickets for the original Coors Field show will be honored for the new 2022 performance. Tickets are on sale now at Ticketmaster.com.

“The Stadium Tour” had previously been scheduled to perform at Coors Field in Denver on Sunday, Aug. 30, 2020. That concert was later moved to Thursday, Aug. 26, 2021 due to the pandemic.

“To all our loyal fans, can’t wait to get back on stage and bring The Stadium Tour to all of our fans,” said Mötley Crüe. “It is going to be one for the history books!”

The tour in 2022 will be Mötley Crüe’s first performances since signing a “cessation of touring agreement,” following their 2014-2015 “Final Tour.”

To all our loyal fans, can’t wait to get back on stage and bring The Stadium Tour to all of our fans.
It is going to be one for the history books!

“Almost six years after signing a cessation of touring agreement, the contract is off the table because a whole new generation of Crüeheads are relentlessly demanding for the band to come back together,” read a statement on Mötley Crüe’s website.

In a video posted by Mötley Crüe, rapper Machine Gun Kelly says the band is blowing up the “cessation of touring contract” because the fans demanded it.

“Legally, we can’t play again,” said Mötley Crüe bassist Nikki Sixx to Rolling Stone at a 2014 show in Denver. “The only loophole is if all four band members agreed to do it, we could override our own contract. But we know that will never happen. There are people in this band who will refuse to ever do it again, and you’re talking to one of them. There is no amount of money that would ever make me do it again because I have such pride in how we’re ending it.”

The Stadium Tour: Update from Def Leppard, Mötley Crüe, Poison and Joan Jett and The Blackhearts

*Announcement for the rescheduled Glendale, AZ date will be coming soon. pic.twitter.com/J1nPzb95Xr

> Top stories curated daily just for you! Sign up for the 9NEWSLETTER to get can’t-miss stories, Next and Broncos content, weather and more delivered right to your inbox.

MORE WAYS TO GET 9NEWS

HOW TO ADD THE 9NEWS APP TO YOUR STREAMING DEVICE

ROKU: add the channel from the ROKU store or by searching for KUSA.

For both Apple TV and Fire TV, search for “9news” to find the free app to add to your account. Another option for Fire TV is to have the app delivered directly to your Fire TV through Amazon.